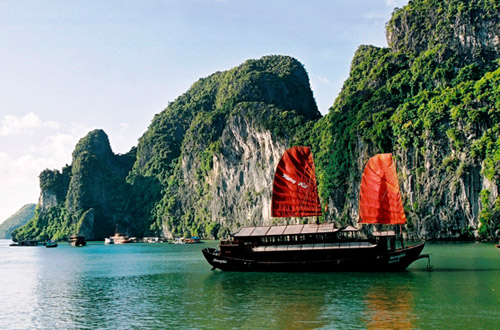 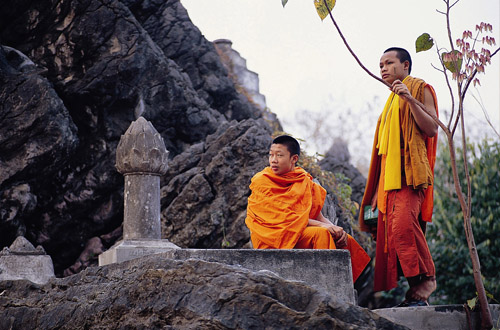 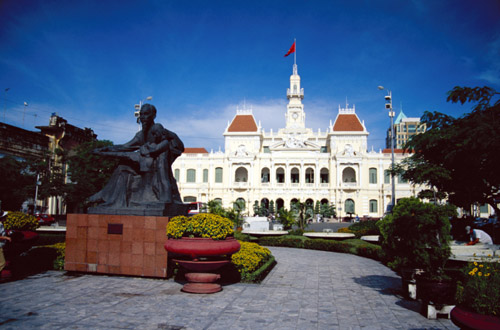 Vietnam lies in the eastern-most part of South-East Asia.This long, narrow \'S\' shaped country runs 1650 kilometres from its northern border with China to its southernmost point which overlooks the waters of the South China Sea. At its narrowest point it is only 50 kilometres, east to west.The coastline, at over 3,000 kilometres in length, is one of the most under-developed in the entire region. Exotic beach retreats are sprinkled liberally along the central and south central areas bordered by pristine beaches and age-old settlements. On its western extremes Vietnam is bordered by Laos and Cambodia. Vietnam has suffered greatly through its long, turbulent history. Internal conflicts and territorial disputes with its regional neighbours, as well as occupation by colonial powers intent on obtaining strategic and economic advantage in the region, have dogged its development. Only since the cessation of hostilities in the long drawn out American war in 1975 has the country been able to realise its full potential. Tourism to Vietnam came about slowly at first, but the industry has come on leaps and bounds during the last decade and Vietnam can now count itself amongst the most frequently visited destinations in the South-East Asian region. The country offers natural beauty and culture in abundance. Outdoor activities including sports, cycling and trekking all feature high on the tourism agenda. Vietnamese cuisine is a joy unto itself with Chinese, Thai and French influences apparent. Local produce is excellent with silk, lacquer painting, embroidery and ornate furniture all popular with visitors.


Getting to and Travelling around

Vietnams main international gateways are Hanoi (Noi Bai International airport) in the north, and Saigon/Ho Chi Minh City in the south. Flights from the UK are operated by Thai Airways and Vietnam Airlines amongst others. Da Nang in the central area also has international arrivals, essentially from Vietnam\'s regional neighbours.
The transfer time into Hanoi takes about 60 minutes. To Saigon about 30 minutes. Taxis are readily available and both city centres are compact enough to allow them to be explored safely on foot.

The Vietnamese climate is tropical in the south, and sub-tropical in the north. The rainy season extends from May until October in the north and May until November in the south. The north experiences two distinct seasons, summer and winter with temperatures ranging from 17º C to over 30º C. In the central region the rainy season extends from September to January. The rest of the year is almost totally dry. The south has two seasons, wet and dry with June to August being the wettest months.

Passports - British passport holders require a visa, available in advance by application to the Embassy of Vietnam. The visa is valid for stays up to 30 days. A minimum six month validity is required on the passport.
Health -  Yellow fever immunisation essential if arriving from an infected area. Hepatitis A and B, polio and typhoid are recommended. Precautions against dengue fever, Japanese encephalitis and malaria are advised. Please consult your GP for up to date information.
Currency - Dong. US dollars and US dollar travellers cheques are widely accepted. Old, damaged or torn notes will not be accepted. Credit cards are becoming more widely acceptable in Hanoi and SaigonÂ where some ATM facilities are also available.
Time - GMT +7 hours.