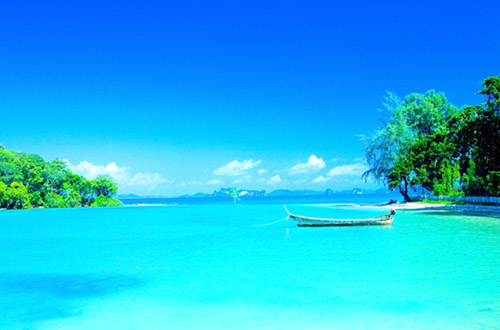 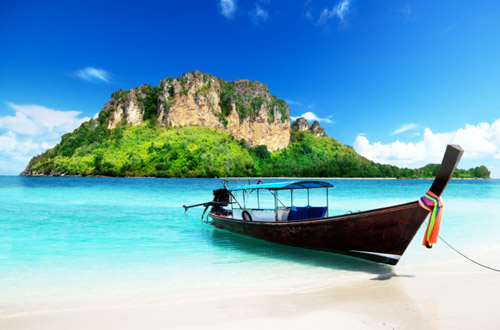 Located on southern Thailand\'s east coast, Krabi province boasts some of the most beautiful natural scenery in South-East Asia. Virgin beaches overlook the Andaman Sea and the eerie limestone karst landscapes of the surrounding marine national park. The coastline is dotted with rarely visited tropical islands, palm fringed beaches, waterfalls, caves, and strange rock formations. A late developer in the tourism sense, development in Krabi has been carefully controlled with restriction imposed on the scale of construction but with a broad range of prestigious accommodations ranging from boutique beachside retreats to 5-star luxury resorts. The main area of tourism focus is around the beach areas of Ao Nang, Rai Ley and Phra Nang. Krabi is built for relaxation. The pace is slow with many of the areas resorts only reachable by boat. Understandably, given the areas splendid natural beauty, much of the province has been designated national park. The Hat Noppharat Thara-Ko Phi Phi National Park incorporates many of the mainland beaches, over 80 smaller islands and the Phi Phi islands - famous for its role in the film â€˜The Beach\'. Ko Lanta National Park to the south of Krabi township, includes several coral-fringed islands, prime diving sites and remains largely unspoilt and underdeveloped.

By Air -Â Krabi International Airport (KBV) is about 15 km from the city centre, 40km from Ao Nang and 23km from Had Yao. Daily flights are available from Bangkok. Â Destination Air Shuttle, Thailand\'s only Seaplane service also routinely flies in and out of Krabi (Ko Lanta) from Phuket and to the numerous outer islands.
Getting Around -Â Taxis and local Buses -Â Open-air buses, converted trucksÂ (songtaews)Â and motorcycle taxis provide a cheap and efficient public transport service throughout the province. Â Services are efficient and regular with buses stopping wherever you want to get on or off.Â
Ferries to Koh Phi Phi and Koh Lanta -Â From Krabi Town -Â Ferries operate to the Phi Phi Islands, Jum Island and Lanta Island. Some services are suspended during the monsoon season (May-October) and are substituted by a combined bus and long-tail boat system which operates from small harbours along the coast.
Longtail Boats -Â The coast is well served by local \'longtail\' taxi boats. Fast, reliable and inexpensive, these boats depart from Ao Nang Beachfront to Railay, Phra Nang and Krabi Town.

The best time to visit Krabi is between November and April when the dry north-easterly winds prevail. From May to October the monsoon arrives, rainfall increases and can be heavy at times, influenced by the moist south-westerly winds.Â